In the Coton de Tulear breed there are a number of diseases - just like any other breed. The majority we luckily can test for - through the test we can find out if the dog is CLEAR, CARRIER og AFFECTED. When we talk about diseases in the Coton de Tulear breed we mostly speak about; Banderas Syndrome (NCA), PH1, Von Willebrand diseases type 1, CMR2 and PRA. As well as Patella luxation and some different eye diseases.

This do not mean that the dog is sick or affected! You need to have two genes of the sickness to be affected - a carrier only has one. If we mate our dogs with knowledge we even can work our way out of these diseases. A carrier is just as healthy as a clear dog - it will never get sick of the sickness it carries, this we need to remember. An AFFECTED dog has two affected genes, - one affected gene from it's mother and one from it's father. This is why we can breed a carrier to a clear one, and achieve some clear - and some carriers. I have put a picture on this site to show this.

Before I describe the diseases It is important to remember that even though the breed has these diseases, it does not mean that the Coton is a "sick" breed, because that is simply not true. The Coton is one of the most healthy minor dog breeds we know of. When we test our dogs, it is not to "make healthy dogs sick"(as many people states), but to make sure that we know what we breed with. We see tests as a breeding tool that can ensure an even healthier race. We want to breed with knowledge - for the new breeders and for the families.

On the contrary, when we know about these diseases and have the opportunity to DNA test for most of them, we can find who is CLEAR, CARRIER or AFFECTED. We can therefore use DNA testing to breed our way out of the sickness, by just pairing our dogs with knowledge and reason. You can see on the right a schematic of how heredity probability works. - Last but not least we thank the Canadian coton club for letting us use their knowledgeable information.

Primary hyperoxaluria (PH) is a rare autosomal recessive disorder of glyoxylate. It is characterized by the accumulation of oxalate and subsequent precipitation of calcium oxalate crystals, primarily in the kidneys, leading to progressive kidney failure. If the storage capacity of the kidneys is exhausted, the crystals are accumulated in other tissues including bones, joints, cartilages, retina and muscles.

The symptoms may include intense abdominal pain radiating to the groin, blood that can be seen in the urine, and the passage of kidney stones. The puppies will die in the first couple of weeks.

Neonatal ataxia was (BNAt – Bandera´s neonatal ataxia) originally called Bandera´s syndrome after the first puppy of Coton de Tulear breed affected, in which the clinical signs of this disease were described.

Von Willebrand disease (vWD) is caused by plasmatic von Willebrand factor (vWF) insufficiency. VWF is a blood glycoprotein (not enzyme) important for blood coagulability. It's primary function is to bind itself to other proteins, and also facilitates aggregation and adhesion of the trombocytes to wound site. The deficiency or failure of vWF function causes bleeding which is most apparent in tissues having high blood flow shear in narrow vessels. VWD manifests oneself as a tendency to bleeding from skin and tissues. The disease can be inheritable or acquired.

VWD type I, the type that occurs in the Coton de Tulear, is the most frequent occurring and the least serious form of vWD. It is inherited autosomal recessively. The disease is characterized by low plasma vWF concentration and normal vWF protein structure.

Most affected animals have few if any symptoms. Dogs with mild to moderate forms of the disease may not be diagnosed for years. Severe forms of vWD usually become apparent by about one year of age.

Canine multifocal retinopathy (CMR) is a hereditary disease. It is a retinal disorder caused by mutation in VMD2 gene (Vitelliform Macular Dystrophy 2 Gene). VMD2 gene is coding a protein bestrophin which is responsible for right forming of pigment epithelium in retina. Mutations in VMAD2 gene cause pigment epithelium atrophy which is leading to serious damage of sight. CMR disease usually arises before 4th month of age in an affected puppy. Clinically, rose/grey colored lesions are remarkable in retina. These lesions are of different size and shape and are occurred in both eyes of affected individual. Total blindness usually comes in higher age.

The mutation causes raised lesions to form on the retina which alters the appearance of the eye but usually does not affect sight. The lesions may disappear, or may result in minor retinal folding. Symptoms of the mutation usually appear when a puppy is only a few months old, and generally do not worsen over time.

Progressive Retinal Atrophy (PRA) is an inherited disorder of the retina of dogs, where light sensitive cells of the retina are programmed to die. PRA occurs in both eyes at the same time, and is not painful. Typically, the disease appears when the dog is around 6 years. PRA is a hereditary disease.

Because PRA makes the light sensitive cells die, and the cells responsible for vision in dim light ("night vision"), then the first clinical sign that the owner often experience is night blindness (poor vision in low light) and that pupils are dilated. Owners often notice the "glow" and increased "eye shine" from the eyes.

Clinical signs in dogs with PRA is typically that the dog becomes night blind in the early stage of PRA, the whole field of vision in all light levels are affected in advanced PRA. In the final stage of PRA, is that the dog is completely blind. At the Coton de Tulear there is unfortunately no DNA test for the disease.

Canine degenerative myelopathy is an incurable, progressive disease of the canine spinal cord. Onset is typically after the age of 7 years. Progressive weakness and incoordination of the rear limbs are often the first signs seen in affected dogs, with progression over time to complete paralysis. A dog with degenerative myelopathy often stands with its legs close together and may not correct an unusual foot position due to a lack of conscious proprioception

DM initially affects the back legs and causes muscle weakness and loss, and lack of coordination. These cause a staggering affect that may appear to be arthritis. The dog may drag one or both rear paws when it walks. This dragging can cause the nails of one foot to be worn down. The condition may lead to extensive paralysis of the back legs. As the disease progresses, the animal may display symptoms such as incontinence and has considerable difficulties with both balance and walking.

The patella, or kneecap, is part of the stifle joint (knee). In patellar luxation, the kneecap luxates, or pops out of place, either in a medial or lateral position. Medial patellar luxation should be considered an inherited disease and is often seen in puppies. Lateral patellar luxation’s heritability is unknown. It is usually seen later in life, around 5-8 years.

Hereditary hyperuricosuria (HU) will cause the dogs to produce urine with very high levels of uric acid. This can lead to bladder stones and less frequently kidney stones. The disease is inherited autosomal recessive. If the dog is affected with - and first have developed - this disease, it will be necessary to medicate the dog throughout its life.  Nutritionally changes or a single operation is not enough, since the dog will continue to form these stones.

Having an dog with two of these genes does not mean that the dog is already sick - it just mean that the dog is in risk of developing the stones. It is a very painful disease for the dog. If the dog has first formed stones in either bladder or kidney some kind of treatment will be necessary, and if nothing is done, the bladder can break, which is deathly. It is possible to test for this disease, but there is still no papers for it at the Coton de Tulear in DKK.

To the right you can see a picture of how these stones can look - but it is important to say that there excist 3 different kinds of these stone, and only one variety belongs to HU. 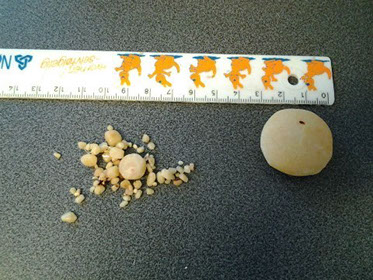 Copyright © 2014-2022 - Brigitte Jespersen, kennel Jespersen - All rights reserved.
Please do not copy anything without our permission.